People are scattered throughout the world in various groups of languages and cultures.

These languages and cultures provide both the flavoring and distinctives of each group, as well as a barrier for communication and interaction with other groups.

Some groups are nested within each other, some are close and have interaction with each other, but some are very distant culturally and geographically.

Movements or flames are somewhat restricted to their own circles. The knowledge of Jesus can spread very quickly and fill a whole people group in a matter of a few decades. But no matter how hot that flame burns and how many thousands or millions it reaches… it is stuck within the walls of it’s cultural, linguistic circle…

…until a few are driven by that burning love inside of them to give up everything and devote themselves to somehow bringing the fire of the knowledge of Christ into another circle. 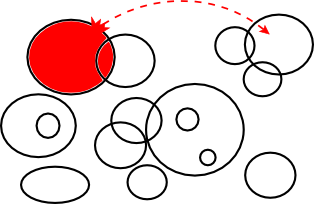 Of course, just getting into another circle means a learning a new language, a new way of life, and adjusting to a strange new land. This takes years of perseverance and a lot of humility. Getting across these barriers involves a whole bunch of slow, trying, and sometimes downright painful work. It means facing embarrassment, misunderstanding, and problematic apartments. The messenger chooses to go through a lot of tedious slugging through life, just like Jesus chose to give himself to walk among us, eat food with us, try to sleep on stormy boats, and deal with difficult people.

Who’s ready to give up their careers, families, and equity just to learn another language and figure out how to live in a dark place? Who’s ready to be one of the crazy few to carry the fire into brand new circles? This kind of work is often not very glamorous or immediately productive… but the eternal results are mind-boggling.

We need people to do something slow and tedious to see the gospel rush forward and speed up Christ’s coming.

Who will make it their life ambition to persevere through this cross-cultural process and become a spring of living water in an unreached people group?

This is a godly ambition that will be need to be permeated with the patience of faith. It’s a life that’s both trying, lonely and painful, as well as exciting, joyful, and tons of fun. After all, we carry both the death and the resurrection of Jesus in our bodies and hearts. And he is with us every step of the way, giving us all the strength, instruction, and encouragement we need. Remember, he did promise us that this mission would succeed.

“And this gospel of the kingdom will be proclaimed throughout the whole world as a testimony to all nations” Matthew 24:14

This in-breaking into new languages and circles starts small and inconspicuous but soon breaks into a massive wave of God’s glory.

In the book of Acts, the believers empowered by the Holy Spirit started spreading the good news within their natural circle… and most didn’t cross over to the other circles.

“But some of them … went to Antioch and began to speak to the Greeks also, telling them the good news about the Lord Jesus. The Lord’s hand was with them, and a great number of people believed and turned to the Lord. Acts 11:20

Although it may seem small and inconspicuous, one grain of wheat, one life given just to get through to another circle for Jesus can produce a massive harvest of righteousness and faith. Thousands more speaking precious languages that Christ desires will be swept up to the throne as the his wildfire surges freely forward, blown by the winds of the Spirit on new ground.