A blog about living for Jesus in places where he needs to be known. Follow @mark4co.

When people think about giving up their career, future plans, friends and family and heading overseas to live for Jesus, they can get a bit nervous. It can feel like standing on the edge of a dark cliff, not knowing what might await them if they jump off. They’re terrified. Will I die? Will my life be ruined? Will I have anything to make me happy ever again? Is this a good idea?

But people take much more terrifying risks all the time. They get married, for instance.

People decide to sign away the rest of their personal freedom until the day they or their spouse dies. They choose to subject themselves to years of sleepless nights and trying days raising children. They choose to put themselves under a whole new host of financial responsibilities and liabilities. They choose to trust their entire futures with another fallen human, not knowing how they might act in years to come. When we think of the logic and the risks involved, this is terrifying.

I’m not saying it’s wrong to get married, or that marriage is a bad thing. I’m just saying it’s crazy. Terrifyingly crazy.

Now back to the terrifying jump towards a life in missions. Is it anywhere near as risky, terrifying, and illogical as the decision to get married?

Let’s have a look at a little comparison of God’s promises and the realities surrounding these two decisions. 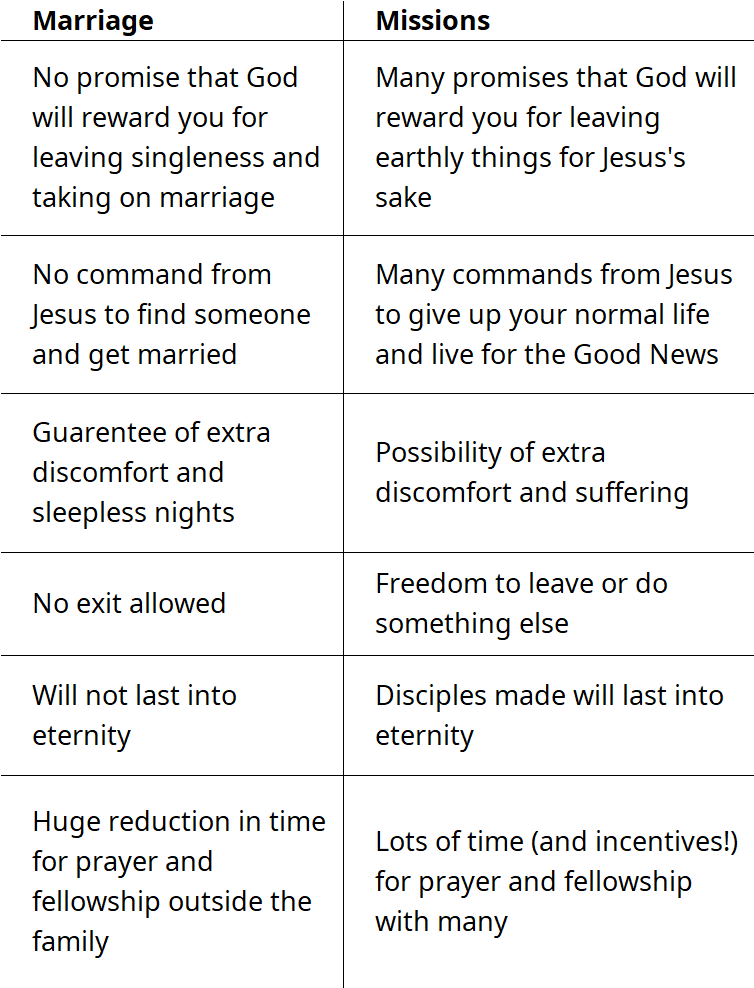 If people can somehow decide that the decision of marriage is worth it, they can easily make the leap to waste their lives in some unreached part of the world.

What if people in the church encouraged people towards missions just as much as they encouraged them towards marriage? Why don’t they?