Looking at old missionary biographies, they seemed to be marked by a simple drive and desire to tell people the gospel. They were constantly heading out to the markets and villages and trying to talk to people. They rejoiced when they got to tell people about who Jesus was and what he did. This was what they lived for, what they were all about.

Now the places where they labored are full of millions of believers.

Paul had a similar desire. In Romans 15:20 he explained how it was his ambition to explain Jesus to those who hadn’t heard about him, so that they could hear, believe, and be saved. Elsewhere Paul writes…

We are therefore Christ’s ambassadors, as though God were making his appeal through us. We implore you on Christ’s behalf: Be reconciled to God. (2 Cor 5:20)

We might say that missionary or apostle’s primary job then, was to carry the message of Jesus into a new place and let people know about it.

This makes sense, since Jesus sent people to be his personal witnesses, people who tell people what they’ve seen and heard.

And you will be my witnesses in Jerusalem, and in all Judea and Samaria, and to the ends of the earth. (Acts 1:8)

But somewhere in these years of missions activity, we seem to have lost the way. In general, I think there has been a disturbing drift away from this basic ambition of letting people know about Jesus.

Somehow we’ve been convinced that it’s not our job to tell people about the Gospel.

Somehow we’ve been convinced that there are other, more important things for us to focus on.

Instead of getting the gospel to new people, modern missions often focusses on re-organizing or “working with” existing local believers, to accomplish set programs or schemes. People feel they need to to arrange the believers’ lives according to the latest Western methods, with the hope of injecting some new strategy which will produce great fruit and growth.

We have come to believe that we have some special methods or techniques, in addition to the Gospel, which they need to learn and apply in order to grow. And so instead of devoting ourselves to letting people know about Jesus, and naturally encouraging/teaching them to trust and obey him in everything, we have been diverted into obsessing about different schemes and programs that promise life and growth.

Disclaimer: What follows is a bunch of massively broad strokes and gross generalizations. I’m trying to get at some systemic tendencies, so please bear with me. Not everyone uses these terms in the same way. 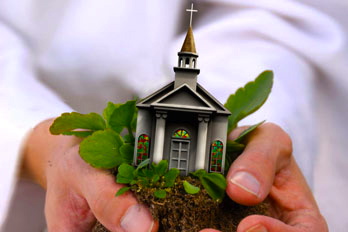 Years ago, people started talking about “Church Planting.” This became the thing for a missionary to do, to “start a church.” The focus turned towards establishing the church institution, instead of concentrating on propagating the message and caring for believers. People got busy setting up buildings and finding local believers they could “work with” to make their meetings happen. They poured their efforts into teaching local believers to be pastors, worship leaders, and tea servers. Creating and maintaining the Sunday morning service became the main objective.

In recent years, this kind of foreign-led, foreign-funded church planting has become less popular. People have felt that this breeds a kind of dependence, imprints a foreign flavor among the local fellowships, and stunts their growth.

These days a new method called DMM (Disciple Making Movements) has come on the scene. The teachers of DMM have observed the problems with traditional CP, and talk about refocusing to get the gospel to naturally spread among the lost. It seems like something radically different, new, and the solution to all of missions’ problems.

But again, it’s being said that it’s not really the worker’s job to tell the gospel to lots of people. Instead, workers learn techniques for fishing out spiritually interested people by saying nice spiritual statements. They learn to look for what they call a “person of peace,” someone who has community respect and social leverage. And they ask this person to gather people together and execute a rigid form of Bible study, following certain questions and procedures.

The same thing has come back in a new form. Instead of focusing primarily on explaining the Gospel to lost people, missionaries are taught to focus on arranging people and making meetings happen in a certain way. And the people who are subject to this kind of work are given man-made objectives for religious performance and obedience. (A certain kind of meeting, a certain set of duties. Sadly, a person’s “obedience” as a follower of Jesus is then judged by their adherence to the agenda given them by the method.)

Instead of simply brining the good news about Jesus, we’re brining a foreign blueprint for religious activities.

There’s a great danger in starting to put our faith in a method being executed, rather than in the Gospel getting known.

Paul didn’t go anywhere to see any sort of method succeed. He went to see people encounter and know Jesus.

“I resolved to know nothing while I was with you except Jesus Christ and him crucified.” (1 Cor. 2:2)

I don’t want to sound like I am attacking other missionaries. Many of my dear friends are deeply involved with these methods, and I myself have been enamored by them at times. People may be trying to follow these latest missions teachings because they really do want to do the most effective gospel work and see thousands saved.

But after 10 years of observation I have to conclude that devoting ourselves primarily to these methods can have grave consequences: 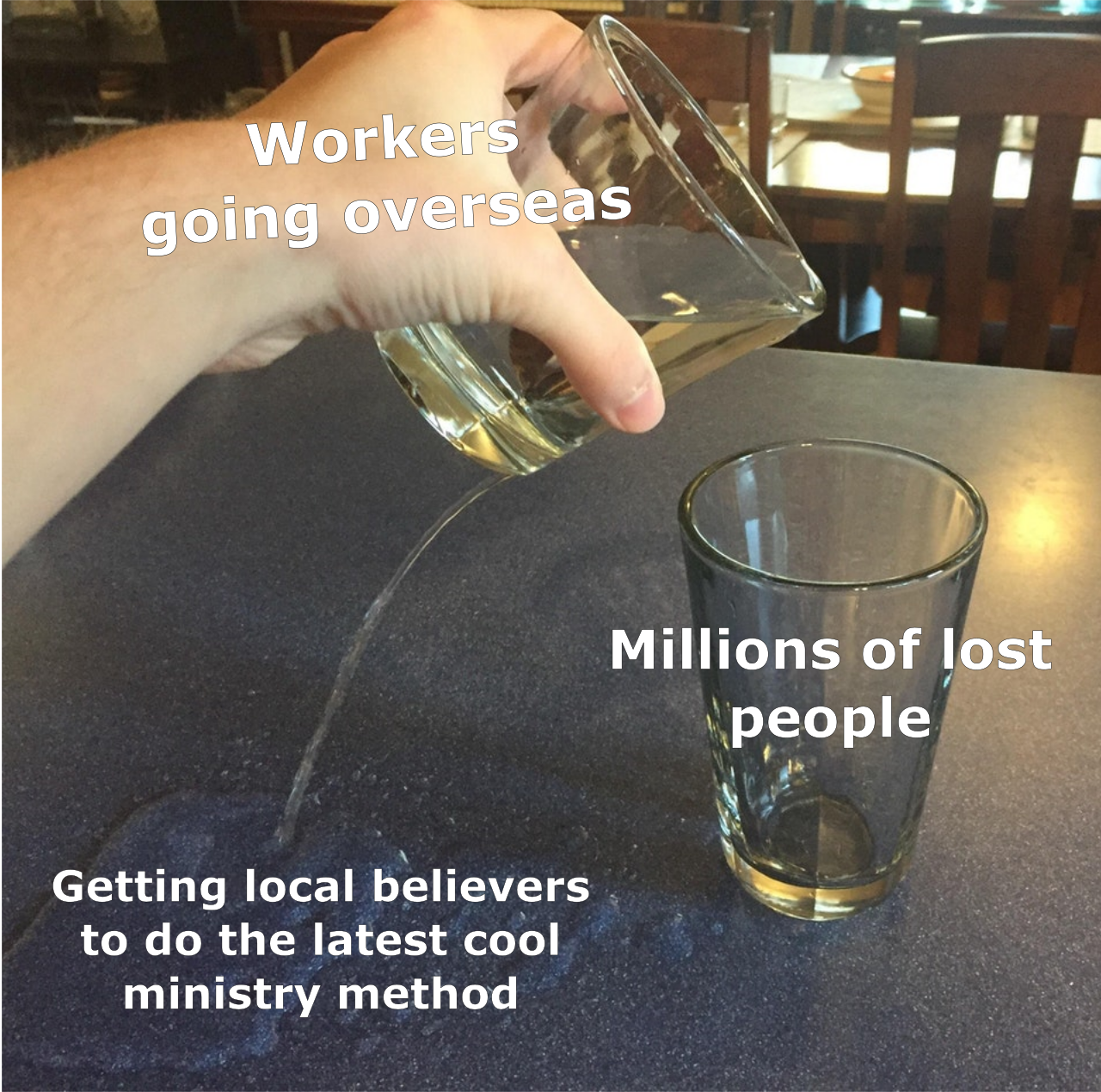 So what about that good old vocation, of making it one’s primary ambition to get out there, talk to lost people, and naturally explain Jesus, pleading with people to believe and be saved?

Well, tragically, it’s often not encouraged or esteemed among missions leadership. Sometimes it’s not even considered a valid job description.

Leader: What are you doing? Are you doing DMM, or CP, or T4T? Are you running a business, or starting a prayer room, or opening a coffee shop?
New Worker: I’m just trying to get out as much as I can, talk with people, and share the good news. That’s what I really want to do.
Leader: No, but really, what’s your ministry? What are you going to do? What are you working to establish? We need to give you a job description.
New Worker: Praying, telling people about Jesus, and making disciples…
Leader: …but… that’s not a thing. You need something to do. Here, join this project over here, they need help…

For many missionaries, these are the kinds of conversations they are up against. It’s often not an option for them to make it their primary ambition to tell people about Christ. They’re often compelled by their leaders and sending organizations to commit to some massive project or method for managing believers which keeps them away from the lost.

Maybe it’s because sending organizations promised the government they would assign people to do things that they can plan, direct and control, so that they can issue tax receipts.

Maybe it’s because there’s something in the fallen nature that keeps leaning towards these human methods, structures, and schemes.

Maybe it’s because there are hordes of demons doing anything they can to keep people from sharing the good news.

Thankfully there are still people who are making it their main goal and activity to get out there and joyfully talk about Jesus… but do they seem like a small minority on the mission field?

How many people are getting out most days and talking with the lost? How many have time to do more than just dip out for a 2-hour outreach once a week?

Maybe not everyone needs to have that strong of an evangelistic gifting or emphasis. But surely when someone does have that ambition, it should be affirmed and encouraged. Surely such a life should not be disdained and squashed out by the missions establishment.

Please do not require young missionaries to do CP, DMM, T4T, or any method at all.

Let them focus simply on prayer, telling the Gospel, and teaching others to love and follow Jesus.

No matter what all the experts and theorists say, Jesus sent us to be witnesses of him, plain and simple. (And following him is what’s really reproduceable.)